Do you Remember When you Thought you Could? 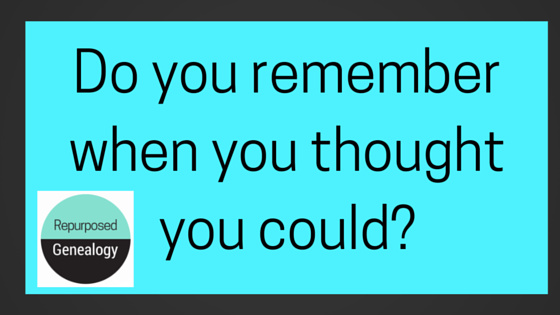 Go back awhile, into those parts of your memory that you push aside.  Remember with me.  Remember when you thought you could?  Do you remember how it felt… to believe?  In yourself?  Your abilities?  Do you remember how it felt before someone convinced you that you couldn’t? You believed in your greatness once.  You were capable, and you knew it.  It was part of your identity, crafted over time with positive reinforcement and validation.

You knew that you could, because you did.  You had talent that your peers didn’t, and you used it to grow, improve and become even greater.  Your supporters told you, you can do it.. and you did.  What happened to change that?  Was it an overnight epiphany or an evolution of obstacles… obstacles that became too great in your mind to conquer? Barriers that you focused on rather than your ability, and talent and gift, and the overwhelming evidence otherwise.

Maybe it was a parent, or teacher , or coach.  Maybe it was a boss or lover or friend.  But you believed their lie… swallowing the doubt until it was absorbed into the fiber of your gut.  Somehow, what they said, or the way they said it, or the fact that they were an Expert meant that they had credibility in a way you never gave your self.

And the lie grew, because lies feed on failure and doubt, you know? They need to be hidden deep within, unexposed to truth to fester.  They are covered with shame, and long left to contaminate everything healthy around them. Lies grow if you don’t root them out. Once you welcome the lie, it takes over like a Biblical plague of locusts…. feeding on your hopes and dreams and leaving a ravaged psyche behind. Picked clean of life after the cloud descends. Barren.  And the worst thing is it is preventable.  You owned their lie, and it became your truth.

Because they must be right.

Maybe you’ve been repeating the lie for years, or decades or longer.  The longer that you’ve eaten the lies which have become your truth, the harder it becomes to change… to shift, to believe that you can.

Do you remember when you thought you could?

Question the lie.  Discard the fear preventing your progress.  Please, believe again.  Believe that you can, that you will, that it’s possible. I want you to cut out the cancer of doubt. Silence the whisper of shame.  And if it’s been there a long time, it will be painful.  There’s no short cut to numb the process, to rip it away….  but you must.

When you you think you can, anything is possible.