I Thought I Could, and I Did 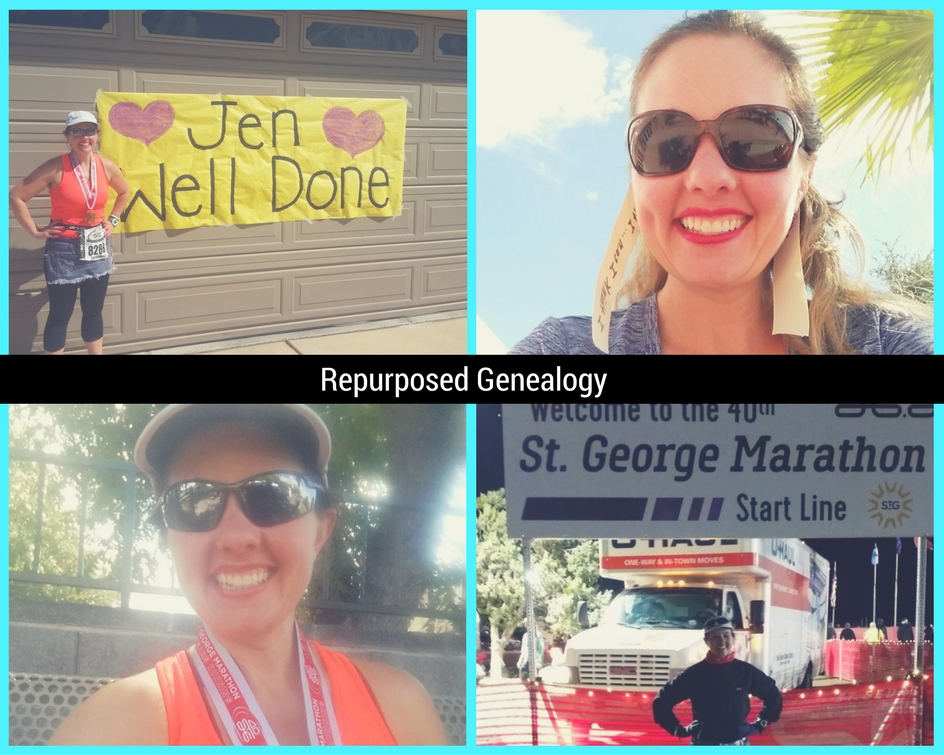 I thought I could, and I did.

I cried so many times Saturday before, during, and after my race. Not just because of physical pain, but because I was so overwhelmed with how it felt to achieve something that has been on my bucket list for over two decades. I started crying after I read this. I told him congratulations, and that I had lost over 100 lbs myself.

The longest distance I ran during my training was 20 miles. I was anxious as I lined up with the slowest pace team that they had available, at the back – 5 hours and 30 minutes.

As I looked around at the other runners, I realized they were regular people in all shapes and sizes. Our pace leader let us know that he walked quickly up every hill. He jogs the rest of the time.  He has paced over 40 marathons and completed over 100.

Before the race, I met Mr. McGregor who was 72, and attempting his 237th marathon.

There were people representing 49 of the 50 US states and 42 different countries to run St. George. (Don’t ask me which state was missing, because they didn’t tell us.)

I  know that I can do anything now.

I have run a marathon.

In the couple of weeks leading up to the race. I had felt discouraged, and was questioning why I was bothering to attempt something like that. I had trained, and prepared physically to the best of my abilities, but doubted if I would actually be able to do it.

It helped when Paul wrote me a motivational letter. When I voiced my doubts with my response, I received encouragement from all of you as well.

As a writer, I believe that words have power. I realized that the words that I was filling my mind with via my internal dialogue were roadblocks creating anxiety. To help offset the negative talk, I decided to drown them out with your words. I created visual reminders to wear.

I made myself a scrapbook with words of encouragement.

I started with words of encouragement from you.

Most of the people who read my blog have never met me in real life. You live all over the world. You took the time to offer me strength when I wasn’t feeling very strong.

I cut, pasted and formatted your words. I reviewed my Facebook timeline and added words of encouragement friends and family have given me about running as I’ve worked toward my goal.

I added them to my book as well.

I included pictures  in my scrapbook. I took while training, over the past 6 months.

I read my book several times a day to remind me of your words. I read your words the morning of my race, when I had to catch a bus at 3:45 am to the start line. I carried your words with me during the 5+ hours it took for me to run 26.2 miles last Saturday.

I have seen a lot during the hundreds of hours I’ve spent running over the past few months. Running has given me time to reflect on natural beauty in our world. I have been able to work through problems that weigh on my mind. I use the time to plan and focus on what’s important.

Most days, I enjoy running now. I have focused more on my endurance, my physical strength and my energy level.

Running has changed who I am.

Running has changed the way that I see myself.

Running has changed the way that I see the world around me.

Just because I love it, you don’t have to love running, or run a marathon.

I am sure that there is something that you have wanted to do for a long time.

Even if you don’t really believe it’s possible yet, I believe you can do it.

My 39th fear is doing my best and failing. I was afraid after training for 6 months, that something would go wrong during the race, and I wouldn’t finish it.

Something did go wrong.

Actually, a couple of things did, but it didn’t matter, because I had already decided that no matter what, I was going to keep running.

When my legs started cramping up at mile 18, I kept running.

When I could feel my brain getting foggy from heat exhaustion as I ran in sweltering desert conditions, I tucked a bag of ice in my sports bra, shoved ice down my back, and poured water over my head.

I have run with strangers, like Edwardo who meets vacationers at the Marriott timeshare at 6 am for a guided beach run. I was the only one crazy enough to show up that early to run on my vacation, but it was worth it.

But mostly, I have run by myself.

I know that it is possible to accomplish anything now, because I did something I didn’t think I could.

Genealogy Jen’s Challenge of the Week– What’s one goal that you haven’t accomplished yet, that you’ve been too afraid to attempt ?