To Anyone Who Didn’t Have a Happy Thanksgiving 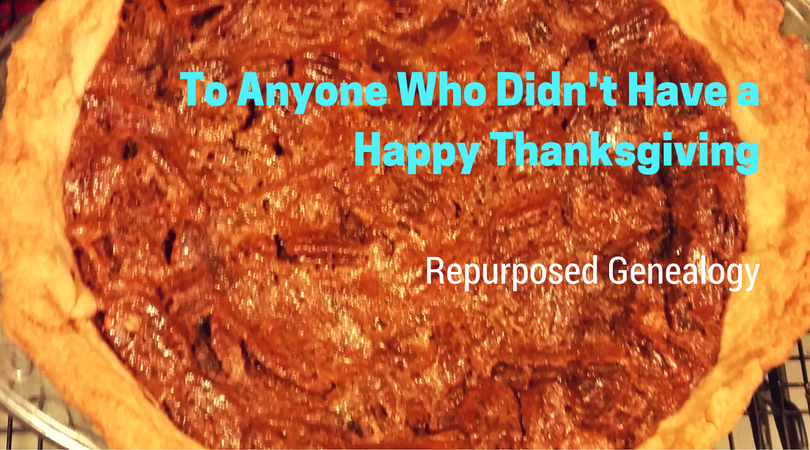 To Anyone Who Didn’t Have a Happy Thanksgiving,

Your day didn’t go the way that you had planned. I understand. Maybe, it was because someone that was a part of your Thanksgiving wasn’t at the table this year. Most of the time you deal with the pain of your loss, but when a holiday rolls around, especially one about family, it hurts.

Perhaps you’re wondering what the heck you have to be thankful for, except that Thanksgiving is finally over.

Maybe you spent the day with a drunk or racist or otherwise toxic and dysfunctional family member that you spend the rest of the year avoiding.

I understand if you aren’t grateful for that person, and admire you for trying to keep the family peace and showing up anyway. Did you burn something? Or have an epic culinary disaster?

It can make you feel like a failure when your social media feed is full of juicy turkeys and pies with golden brown crusts. It’s okay.

And pictures of all of those smiling families with their arms around each other brimming with gratitude and full of mashed potatoes?

Those pictures aren’t always a true reflection of the situation.

They don’t show the argument in the car on the way to the in-law’s house.

They don’t show the kid who had an epic melt down before the picture was snapped.

They don’t show that the people who are trying so hard to look like they are pulled together for you in the pictures are really falling apart on the inside.

To anyone who didn’t have a Happy Thanksgiving, you’re not alone.

One year, I was so drunk that I didn’t bite my tongue when my mom’s boyfriend made another misogynistic remark about women.  The next three years they dated, social situations were even more awkward for both of us. Thankfully, we never spent another Thanksgiving meal together.

One year, we had Campbellgiving instead of Thanksgiving the Wednesday before, because we had our new business open on Thanksgiving day. We only had a couple of customers, and it wasn’t worth the time we could have spent together as a family. The evening ended in an argument with me screaming at my tired husband.

Pretty much the opposite of happy.

Another year, we burned the stuffing, even though my husband and I are great cooks. Because our oven isn’t very big, we cooked the stuffing on the grill in a pyrex dish. It was so black on the bottom, that the whole thing tasted like charcoal. An animal tried to eat part of it in the middle of the night, because we had left it outside on the deck. We saw paw prints in the snow.

Even the animal left most of the burned stuffing in the pan it was so gross.

One year, my brother and his wife announced they were expecting their first baby at Thanksgiving dinner. I was in a dead-end relationship. I cried a lot that night because I felt so alone.  I ended the relationship the next day.

Another year, I was so sick from medication I was taking to try to get pregnant, I could barely eat dinner. My grief was magnified when I heard that my brother and his wife were expecting their second baby which was a “surprise” and unplanned.

This year, was mostly happy for me. It was happy, because I’ve realized that Happy Thanksgiving doesn’t have to mean Perfect Thanksgiving.

On my Happy Thanksgiving, I snapped at my mom in frustration more than once. I argued with my husband over a miscommunication about cooking.

I had one boy wake up crying after bedtime because he puked over the side of his bed. There were several other parts of my day that weren’t perfect either.

If you had a Thanksgiving that didn’t measure up to what you hoped it would be this year, you’re not alone. Even though some years are better than others, Thanksgiving is still one of my favorite holidays.

Just be thankful that it is only one day a year.

PS That’s exactly how I feel about Christmas. (I love Jesus, but I hate Christmas.)