My Commitment for Black History Month 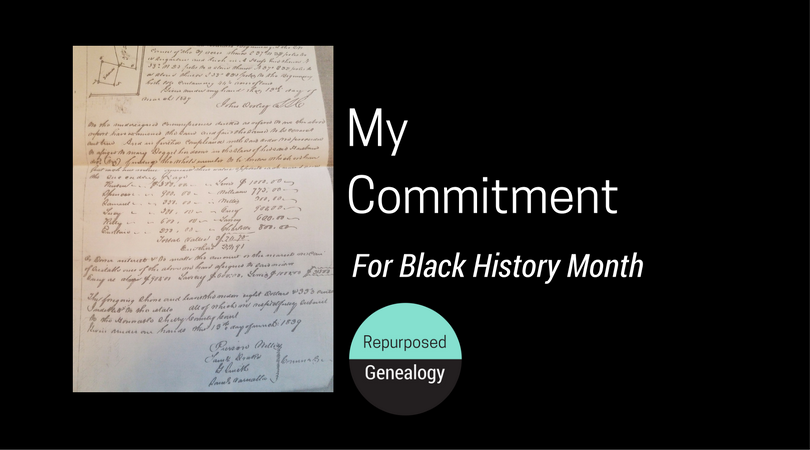 I’ve written about what you can do when you find an ancestor who owned slaves. You can read my post here. My friend Cathy Meder- Dempsey committed last year to celebrate Black History Month by transcribing at least one record a month, from her ancestors, that contained the names of enslaved persons, and sharing the names with the Slave Names Roll Project.

My commitment for Black History month is to do the same. I will transcribe every document I have until all the names of enslaved people are recorded. I’m starting this month.

I challenge you to do it also.

I don’t like looking at these records. I’m not very good at transcribing in general. Plus, every time I see an inventory and appraisement, my stomach churns. I don’t want to see the names of people listed next to pots, pans, and feather beds.

I should feel uncomfortable though, and so should you. Our discomfort ensures that we know how deplorable it is to dehumanize another person. An internet troll commenting on my other blog post last week tried to convince me that we are all sinners, and slavery is no more a sin than anything else.

That’s not what I believe.

I believe there are fundamental things like murder and slavery that are just wrong. Regardless of what time period in which they occur, they aren’t okay.

Oppressing or persecuting religious or ethnic minorities is not okay either.

This is the part of my blog post where I feel like I’m on stage making an impassioned plea to you. Kind of like when I was Patrick Henry in my 7th grade play and recited the give me liberty or give me death speech. (I still have most of it memorized by the way.)

Why stand we here idle? What is it that gentlemen wish? What would they have? Is life so dear, or peace so sweet, as to be purchased at the price of chains and slavery? Forbid it, Almighty God! I know not what course others may take; but as for me, give me liberty or give me death!

Usually, the things that are the most uncomfortable for me to do are the most important to do anyway… like running.

After reviewing the documents I had previously transcribed, I realized that there were people who were missing.

I found and released the names of Lucy, Samuel, Willis, Emaline, Ruben, Kitty, Spencer, and William in my other blog post.

Amy, Lavicy, Lewis and Charlotte were not listed on the inventory and appraisement record I previously transcribed for Presley Doggett.

I only have photo copies of the will book, so I am not able to look through the other pages to see where Charlotte went.

These records are hard to read. I might not transcribe them perfectly, but I’m going to do it anyway. These people deserved to be named and acknowledged.

An motion of Silas Dogget and Anthony Tinsley ordered that George Smith Colonol Drake and Perseus Willis and Samuel Varnatta or any show of them being first sons do allot and afrign unto Mary Doggett her Dower in the lands of and slaves of which her husband Presley Doggett died seized and profered and that they make report thereof to the court.

A copy attest to

Given under my hand as Justice of the peace for Shelby County this 13th day of March 1839.

Surveys for Mary Doggett widow of Presley Doggett decd. Her Dower interest of in and unto the county of her husband decd, as laid off or directed by her and By George Smith, Samuel Drake, Persisus Willis and Samuel Varnatta Companions appointed by the Shelby County Court who attended on the 13th day of March 1839. And After being serveyed by Charles Baird esquire did direct me the lay of said dower as apreasented by the armi***d ____ and Commanded as follows Beginning at a Hoopwood Corner the Adjoined ___ in Samuel Vernetta and near William McDonald SE corner whereof north 23 degreees West 89 to a star swinging 1 pole and 5 clicks north 3 1/2 E from wherein creeks  S E 1/2 ac 45 degres to a stone shared S75 E 9 heading and segmented wherein S 53 E 25 to poole on a beach wherewith 33 degreees O 132 poles so the beggining containing 39 1/4 acres alloted and nearly all cleared and order to have timber and farm land off five acres adjoining as Dower as hereon she pallatt and those Bounders Beginning with the SW corner of the 39 acres whereas S 37 W 32 poles W a sugartrees and such in a stamp here wherenever N 53: W2.5 poles to a stone shower N 37 degrees E 32 poles to a stone shared 253 degreees E  315 pled to the Beginning both lots containing 44 1/14 acres of land Given under my hand this 13th day of March 1839 John Dooley SSC