Bear their burdens with ease 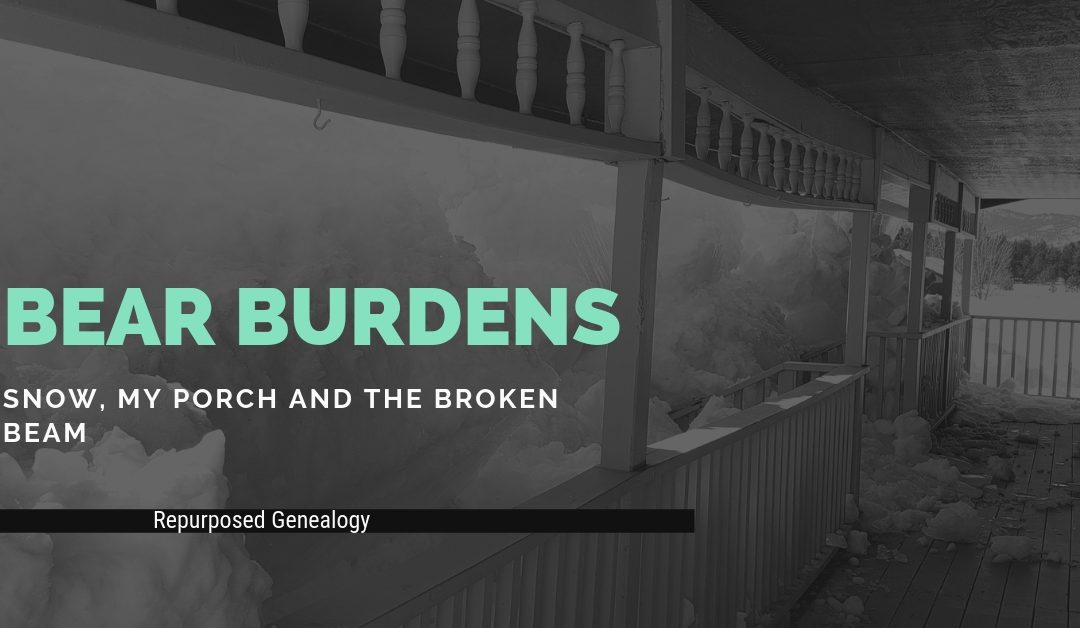 I stared at the split beam, on the house we were less than 24 hours away from closing on, and tried to piece together what he was saying in my mind. My worst fear had happened. That’s not lucky.

It snowed almost 15 feet during the month of February. The weight and burden of the snow split the beam and the trim below it. I knew that it was possible. I pointed to the bowing of the trim the first time that we looked at the house with our general contractor.

“I’m concerned about the roof on this house by the porch, especially with all that snow on it. You can see where that decorative trim is starting to bend.”

“Yeah. I don’t know if it will be an issue or not, but you definitely want the inspector to take a look at it,” our contractor replied.

I really liked the house despite the potential issues with the porch. It had everything we were looking for, and more.

Most homes here in the Idaho mountains have steep angled steel roofs so the snow can easily slide off of them. They can bear their burdens with ease. The snow helps insulate the base of the homes during the winter. The house’s steep roof angles to a porch and extends at less of an angle. The sheets of snow were getting trapped in the angle instead of sliding off due to the original design.

I asked our realtor to let the home owners know, so they could shovel off the porch roof. We made an offer on the house. A couple of weeks went by, and the snow hit hard. Twice, I couldn’t even leave the driveway of our rental house to open our store. I didn’t really want to though. I was tired of working.

They canceled school 3 days in a row. There was so much snow, that there was nowhere for the snowplows to put it all.

The snow was becoming a burden, and so was our business.

I didn’t want want to go to work, and was late most days to open. The burden of running my store alone after my only employee left for college was starting to weigh on me. I felt myself bending under the pressure. I reassured myself that it would be okay. I could handle the pressure. I’m strong, and have been through hard things.

It can cost more than $50 an hour to pay for workers to shovel off your roof due to the dangerous and physically exhausting work involved. I asked our realtor about the roof again. He said that they were going to clear it before our inspection.

Tuesday morning from my hotel room, I had a video conference with the manager of our second store, and the CEO of the company. The CEO was concerned about both stores not performing where they needed to be. He warned us about what could happen if we didn’t turn things around. I could feel the weight of responsibility.

Our home inspection report came back “The weight of the snow is 50 lbs per square inch based on the snow fall, and age of the home, the sheds (porch roofs) are at or near capacity. Every effort should be taken to remove the snow as soon as possible.”

Sun warmed and melted snow turning it to sheets of ice. It has snowed more, thawed, and frozen creating ice dams. I have watched the sales numbers on both stores decline despite my efforts. It’s been a lot of pressure. I felt like I had done everything that I could “short of shoveling the roof myself”, to prevent my situation at work to fall apart.

Both the front and back porch beams broke in multiple places. It will take time for the rest of the snow to melt to see how much damage there is to the porch roof, railing stairs and remainder of the beams.

The weight of the burden did massive damage, and our realtor said we were lucky.

The day before the beam broke, our attorney wrote a provision in our home contract for the former homeowner to cover the expense and insurance claim for the porch for our new home if it would have issues. Money was set aside in an escrow account for a deductible. The insurance claims adjuster who came the Monday after we closed estimated it will cost about $50,000 dollars to repair.

A broken porch was something that I hoped that we wouldn’t have to deal with. The porches were built with standard construction beams. Usually, here in the mountains, we need larger, more sturdy beams to withstand the weight of the snow year after year.

It was a blessing both beams broke the day before we owned the home. They will be repaired.

It will won’t cost us thousands of dollars because it happened the day before closing. Ultimately, the house and porches will be stronger, more stable and secure. We know were the porch needs to be strengthened. It can be fixed. We don’t need to burn the house down and start over. It’s just the porches.

I talked to my CEO again. He called me the afternoon the beam broke. “How are you holding up, Jen?”

“Honestly? I’m tired. The pressure of this is getting to me. I’m feeling discouraged. I know I can’t quit, but I want to. It’s taking every ounce of my strength not to just theoretically burn down the store and walk away.”

He paused before responding. “If owning your own business was easy, everyone would do it. If becoming wealthy were easy, everyone would be rich. You guys have worked so hard for the past 7 years, and you’re almost there. If you can hold on a little bit longer, and get through this, you will be stronger on the other side because of it. Your business will better because of it. If you can learn to work through this, and improve things, it will be the key to your financial freedom.”

He’s right. Our situation has dramatically improved in 2018. The blessings we’ve experienced financially and emotionally are too many to list.

It hasn’t been easy. The burdens of the past few years nearly broke me with the pressure and strain. Our business, our personal financial situation, and my marriage have nearly collapsed. The strain has allowed us to see where there have been structural and relationship weaknesses. We have been proactive and strengthened them with new beams to weather future storms and carry the burdens with ease my husband and I face as a team.

Right now, you might feel the pressure. Maybe you’re buckling under the weight of your burdens. Maybe, you’ve already broken. You’re staring at the slivered fragments of your life, and are wondering how to fix what’s wrong.

It will be okay.

It may take time. It will take a lot of work. But, it will result in a stronger you. You’ll be able to weather future storms you face with the confidence knowing that you’ve prepared for the burdens of life ahead of you.

A broken beam isn’t the time to burn the whole house down and start over… even if it feels like the easy option. It’s an opportunity to strengthen your porch. You’re lucky. Now you know what needs to be fixed.

Genealogy Jen’s Challenge of the Week – What’s got you weighted down right now? Own it. Write it down, and the beams you will put in place to strengthen those burdens with ease.