How the digital age has killed print, and why it doesn’t really matter

It was 1993, and my step-father, was an early adapter.  We had a 6 disc CD changer in the trunk of our car (most cars still had cassette tapes) He had a car phone.  (before cell phones were big) He had a digital pager like some doctors, that scrolled messages taken by an answering service across the screen, and we had a computer with the internet.  He loved to talk about how it would potentially revolutionize the way that people interacted with each other and did business.  He was a realtor, but read complicated code books to figure out how to build websites.  He was an entrepreneur and knew that there was a way he could make money.  I never used the computer to type papers for school, though a few of my classmates used theirs, carefully tearing the edges off the paper from dot matrix printers.  We weren’t allowed to touch the computer, it was for his work. 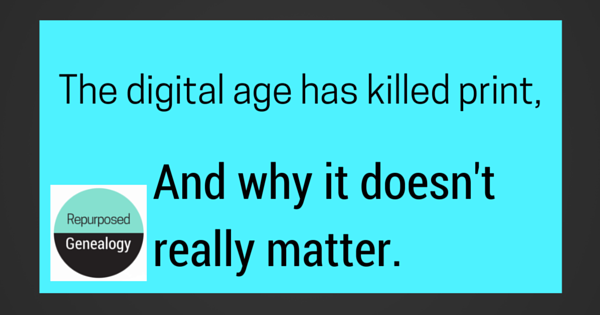 Instead, I used a Brother word processor that my father bought me for my 16th birthday.  He knew that I wanted to be a writer.  In our high school, it was mandatory to take at least 1 year of business classes.  Most Freshman took introduction to typing, and honed their competitive skills at typing.  Bragging about 95 words a minute.  I opted to take introduction to Marketing instead… and loved it.  I didn’t learn how to type, aside from hunt and pecking at the keys until I was 20, and paid to take a community college course to improve my skills as a temporary assistant.

My bookshelf as a teenager was, (and if I’ll be honest still is today) categorized by subject like a library.  I used to alphabetize the books by author’s last name within each section, but with 4 pairs of small hands removing and replacing books, I am lucky if they aren’t scattered all over the house.  I didn’t want to get a Kindle.  I thought the more people who had them, the less people would read.  I thought that they would use them as an excuse to refuse to carry paper books with dog-eared  pages.

The first few years I was married, I would buy a book each time I visited a warehouse store.  My husband was annoyed that I would finish them in a day, and chose not to go to the library.  He didn’t understand when I tried to explain that I liked to own the books  I read.  I wanted to be the first to smell the glue as I creased open the spine to read beside the seam.  I wanted to know that I could pen a  note about a great sentence in the margins of text.  I wanted to feel the weight of a book in my lap as I sunned my body at the beach.

I subscribed to magazines for 15 years.  And then, I virtually quit reading.  After giving birth to to triplets, It took a women’s monthly book group, where we rarely discussed books, to read anything without card board covers or bright illustrations.  It took me nearly the entire month to complete each book .

Unlike my step father, I have been a late adapter of most technology.  I went years without a cell phone.  I kept the most basic features.  I was one of my last friends to get a “smart phone” and used to think that texting was very impersonal communication.

As my boys grew, and were enrolled in school, we had to complete nightly reading logs, calculating the number of daily minutes and what they read so they could attend quarterly school reading parties.   The teacher sent home a photocopied article about ways to inspire your children to read.  The number one way to inspire kids was to model the behavior.  The second, was to read with them.  I wanted my children to love books like I did, but I wasn’t reading books.

Then, I realized that I had been reading.  I read over an hour a day on average.  It may not have been a spine on a book, but I was reading… online.

In addition to time spent reading status updates for friends on Facebook, I also did research.  I read blogs, news articles and opinion pieces.  I read about world events, and political candidates.  I read about parenting techniques and how to accomplish home improvement projects or craft new things.  I read census records and data bases and Wikipedia articles to understand historical context.  I knew that my children were frustrated at times that I was always on my phone.  I was too.  I felt guilt  for not “connecting enough with them” ….  Until I realized I was modeling reading.  Even if I wasn’t modeling moderation… which by the way I’ve always claimed is overrated because I have never excelled at it.  I’m an all or nothing type person.

I bought my last paper book 1.5 years ago, but I read a lot.  I’ve heard people claim that writing as an art would die in the digital age.  I feared that long ago. Now,  I feel that writing  has flourished.  As the printing press gave access to the masses for books, the internet has given a voice to writers everywhere.  There are affordable ways to share their ideas and material with others.

People still read… and they may read more than they used to.  It may be in short clips, but they read, and they share the good stuff with their friends.  They post it on their social media platforms, they forward it to a friend that can relate to it.  They subscribe to blogs to devour more of those precious written words.

Most of what is available may not be intricately honed.  But, it doesn’t need to be, to convey the point.  Even if it takes writers time to be discovered, even if it’s not appreciated by the masses, there are still brilliant writers. Really good art, always has people who appreciate it, and acknowledge it’s value.

As future generations sift through the digital content available, from our generation,  I believe they will see a shift… one that I’ve already seen begin. There may be a lot of content out there, but the good stuff, the words that inspire change, that paint vivid images, that are believable in the way their honesty resonates, will be read, and will always have fans.

Do you agree or totally think that I’m wrong?  Comment and let me know…