Being Late, My Struggle with Infertility 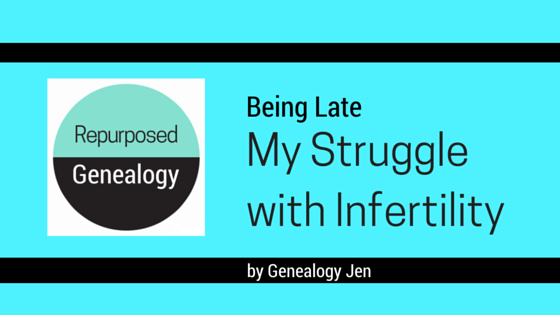 I am chronologically challenged.  I am usually late.

I try to fit too much to do into too little time to do it. How much multitasking can 5 minutes hold? One more thing?

Or, I realize something important that I forgot and have to go back to retrieve. Focusing my distracted ADD mind can be challenging .

Maybe I’m late because I was born at 11:23 am, and mornings have always been a bit rough for me.

Being late takes on a whole new meaning when you are attempting to conceive a child.

I wanted to be late.

And as usual, I was.

33 days went by without my period starting, so I bought a pregnancy test. I was excited as I waited for the double lines to appear, but they didn’t. The directions said to wait a couple of days and try the test again if your period didn’t start.  I did. It was still negative. At day 38, my period came.

Over the next 8 months that my husband and I tried to conceive a child, I was late a lot. Each time, after the magical 28th day, I would become more hopeful. Each day that I was late, brought more certainty that I was pregnant.

And I started to worry more, and fear that something was wrong with my body. I gained 30 lbs in a few short months. I was nauseous and dizzy. I had headaches and acne. I felt like I had the symptoms described in the pregnancy magazines I read.

But I wasn’t pregnant.

Then, I was really late.

I went 97 days without a period. The pregnancy tests were negative, and I knew at that point, there was something wrong with my body.
I went to my OB-Gyn and she listened to my symptoms. She told me that she wanted to do a few tests to confirm or rule out possible fertility issues. She scheduled blood work and ultrasound with a follow up appointment.
A few days, after a blood draw, I had my first of numerous ultra sounds. I had the tech explain to me what I was seeing on the screen, and then she suddenly stopped talking.

She took a couple of pictures, and said that the doctor would meet with me in her office after I got dressed.
My husband was with me, and held my hand as my doctor explained my infertility issue. I had PCOS…. Polycystic Ovarian Syndrome.

Both of my ovaries were covered with cysts that caused hormonal imbalances which impacted me ovulating on a regular basis or at all.

My doctor told me that rapid weight gain and other symptoms were side effects. The good news was the blood test she gave me, said that I had a viable egg supply left in my cyst covered ovaries.

My husband and I were referred to a reproductive endocrinologist who was able to treat male infertility in my husband, and my fertility issues as well.

I am grateful that my husband and I were fortunate to live in a part of the United States with access to trend setting Reproductive Health Care for men and women. Although we lived in a state with mandatory assisted reproductive health care laws, we fell into a loophole. My health insurance was through a self-insured company. My husband’s company was based out of state. Unlike many couples, we were able to pay for the treatments we needed to conceive our children.

I believe the choice to bear children should not be limited by geography or income. Freedom of choice and reproductive health rights for women should also include the ability to conceive children if they desire.

I have often thought that if I had lived in a different generation or time period, I may never have been able to bear children.

There are women all over the world who are hoping to be late.

Like me, they are part of the 1 in 8 couples who struggle with infertility issues.

Some of the most painful things were said to me by strangers, friends and family trying to reassure or comfort me…

Just relax, it will happen when the time is right.

I’m an anxious person by nature, telling me to relax makes me worry more. Who decides when the time is “right” for me to get pregnant? My husband and I decided it was right, and it hasn’t happened.

Just be grateful that you don’t have to deal with kids right now.

When you want them more than anything, every unplanned pregnancy you hear discussed by friends or strangers feels like an affront to your womanhood and is a reminder of what you long for.

It’s not God’s will right now.

Umm, how do you know that for me and my life when I believe the opposite?

This week is National Infertility Awareness week. Statistically, either you or other couples you know are going through the arduous struggle with infertility to become parents for the first time.

Or, maybe they are experiencing issues with secondary infertility, and want to add to and grow their existing families.

Here are 3 things you can say to someone struggling with infertility that I appreciated hearing….

This must be really difficult for you.

I care about you, and love you no matter what happens.

I know how much you want to be a parent.

Don’t add a but after any of them. It will be tempting. Just don’t. And by that I mean…

But you’ll get through this

But it will all work out

But at least you have each other.

In my experience, it wasn’t what I needed or wanted at the time. It simply minimized my trial and anguish to conceive a child.

I am still late.

I’m late a lot. Even when I add in a time buffer. We held the elementary school record last year for most tardies. We had a 21  per quarter average.

There is usually a missing shoe, or homework or some other fiasco to start our hectic mornings.

I still get frustrated about being late, but now people think that it’s understandable, because I have children. It’s okay to be late.  And it is… but probably not as often.

When I think about being a mother to my four precious boys,

I am glad that I’m late.

Genealogy Jen’s Challenge of the Week – Find a childless ancestor or relative and  learn more about them. Record part of their story through writing a life sketch or using an audio file recording app like StoryCorps  People without direct descendants deserve to be remembered. 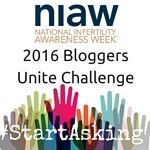