Second Place is the First Loser 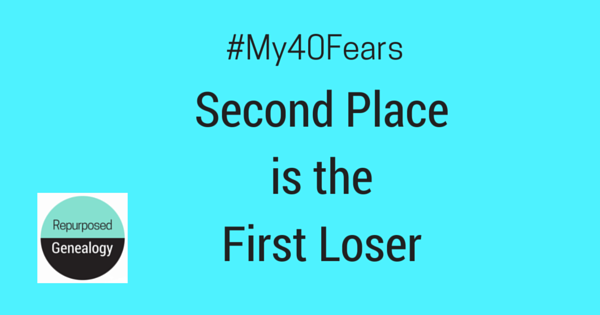 It should have been one of my most rewarding moments yet. Medals dangled from my neck, as I held my plaque. I had placed high enough to compete at DECA Nationals in my event Hospitality and Tourism. I had met the goal I set for myself.

All I could think about instead was the No Fear T-shirt Devin wore at least once a week. The T-shirt I stared at the back of in English class for 48 minutes every weekday he wore it.

Second place is the first loser.

I had placed second overall in the state of Washington in my high school business marketing  competition. I had worked hard taking numerous practice exams.  I spent hours rehearsing in role play business exercises. I had visualized them calling me up to the stage to receive an award,  and they did.

All I could think when I watched that girl with the perfectly spiral, permed,  blonde hair accept first place, was that I lost.

I placed in the top 20 overall at the DECA National Competition 6 weeks later. I was awarded medals, and stood on a podium in front of over 10,000 people to have ribbons placed around my neck. Only the top 10 received college scholarship prize money.

I was a loser.

The second place is a failure mindset has robbed me of experiencing joy. I have missed savoring my accomplishments. It has spilled over into other areas of my life as well.

The nagging perfectionism to compare my achievements to others, and sell myself short usually starts with an only.

You finished a triathlon, but you only finished in the bottom third.

You gained new followers/ readers, but you only have _____.

You did your best, but you’re only a loser.

My fear of failure has prevented me from  attempting things as well.

I was ranked in the top 10% of my high school graduating class. I didn’t apply for any college scholarships.

My senior year in Arkansas, I won one $15 check for my voice of democracy essay contest I entered through a local NPR station.

I placed 2nd in the state.

Until recently, I kept the medal I won with my check untouched in a drawer. I was ashamed of placing second.

I am afraid of doing my best and failing, because I am competing with a first place ideal that is impossible to beat. I always fall short, and 2nd place is the first loser.

Self-help books and articles, hours of therapy, and surrounding myself with tangible mementos of my accomplishments only create temporary delays to my eventual mental defeat. My inner critic wins first place, regardless of what I achieve, beating me down in the process.

I am afraid of doing my best and failing, because I have already failed.

I continue to fail most days.

I have done my best for nearly 4 decades to defeat my inner critic, and I have failed.

I have come in second place.

Second place is the first loser, but I refuse to quit.  No fear. Eventually, I will beat my critic and be first.

Genealogy Jen’s Challenge of the Week– What robs you of joy? What makes you feel like a winner?
Bonus points – What have you done to silence your inner critic?