I’m a white girl, but all my role models are black women 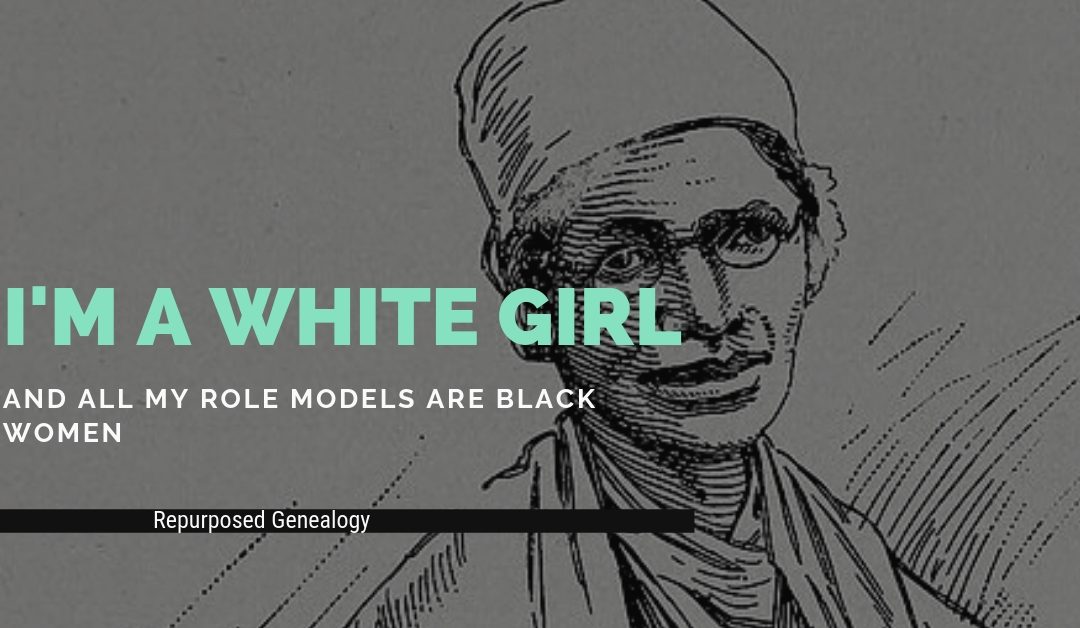 It wasn’t until I started thinking about who my role models have been through out my life to write this blog post that I realized it.  My role models are courageous women throughout history I’ve read about in books. They are artists, entrepreneurs, friends, and women who have influenced my genealogy research skills.

I’m a white girl, but all my role models are black women.

I’ve thought about why. Like most people, I’ve chosen role models throughout my life based on talents and skills I admire. My role models embody what I want to improve about myself.

They are Sojourner Truth who never learned to read or write, but was known  for her oration skills that influenced both the abolition and women’s rights movements. Maybe she’s my role model because I was afraid of public speaking.

My role model is Ella Fitzgerald with her perfect pitch. She influenced the jazz movement with her scatting, and broke down racial barriers with her singing voice. I admire American Folk artist Clementine Hunter. When I see her art, I am struck by the vibrant colors she used in her art to depict the difficult everyday life on a plantation. I see hope and optimism when I see her work.

I look up to Oprah . Her vulnerability, generosity, and compassion have made her one of the most influential women in America. It can be difficult for me to be vulnerable. I’m afraid of sharing too much with friends.

Maya Angelou is my role model for the precision of her poetry that reveal her quiet determination and forgiveness. I wrote about her influence on me in this blog post.

What attributes am I drawn to that these women, and so many more, from different backgrounds and time periods share?

They are courageous. They are strong. They are leaders.

More than who your children choose as role models, I believe the more important question to ask is why they chose them. Sometimes, it’s hard separate the personality from the attributes. When I was a teenager, I collected and decorated my room with Marilyn Monroe memorabilia. I adored her.

My mom could have assumed that I was misguided with who I chose to admire. Marilyn Monroe became a sex symbol, had an affair with the president, and died of a prescription drug overdose. She wasn’t a typical role model.

I told my mom that I looked into her eyes in photographs through out her life, and I knew Marilyn Monroe. I saw her vulnerability in the test shot of the Norma Jean Baker framed on my wall. I saw the girl she was before she became who others wanted her to be. I admired Marilyn for her intellect and ability to influence others before other people wrote about it .

My mom supported me without judgement, and bought me a huge, iconic framed picture of Marilyn from The 7 Year Itch.

People are flawed, and I don’t think it’s good to depend on one person as a singular form of adulation. It is easy to be disappointed when a role model doesn’t live up to your expectations.

I have a hard time understanding why my brilliant 11 year old would choose someone as a role model that is so different than the people I admire on the surface. I’ve reasoned that a professional athlete might be a role model for their skills or talent, in a sport, but not for their personal life choices.

I asked my son about what he admires about Donald Trump to understand and support him in his choice of role models, like my mom did for me.

He’s our president mom. Regardless of what people think about him, he has one of the most important jobs in our country. He has the courage to say what he’s thinking about, and people listen to what he has to say. Nobody thought that he would win, and he proved everybody wrong. He wants to make America great again, and I want that too.

My son loves wearing his red Make America Great Again hat.  I am proud of him for forming his own opinions. He told me about an experience when he got home from his trip to Yellowstone this summer. A stranger made an intentionally loud remark to her husband about his hat while he was watching a geyser.

I asked him how he handled it.

Eh. I just ignored her Mom. She doesn’t even know me, or what she’s talking about. Besides it’s kind of ironic because neither of you guys even voted for Trump.

I smiled and hugged him.

I don’t think I need to worry too much. Besides, the same son shocked us at 11 months when he pointed at the man on TV, and loudly pronounced his third word ever, “Obama”.

And we didn’t vote for him either.

Who are your role models? Comment and let me know.

This post is part of Hoagies’ Gifted Education monthly blog hop. You can read more about role models at various ages and stages by clicking here or the graphic below.